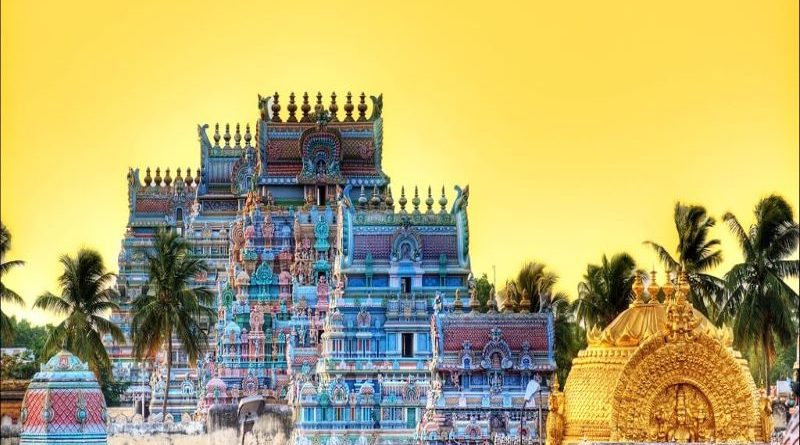 India is a land of rich history, culture, and traditions; and the temples in India are among its most magnificent cultural treasures. The southern part of India is home to some of the finest temples in the entire country, most of which are popular pilgrimage sites too. The temples of South India are known for their beautiful Dravidian style of architecture featuring decorated facades, elaborate carvings, sculptures, towering gopurams, etc. If you are interested in Indian history, culture, and architecture or if you are traveling in search of inner peace and spirituality, here are some of the temples in South India you can visit.

A famous pilgrimage site in South India, Ramanathaswamy Temple is one of the 12 sacred Jyotirlingas dedicated to Lord Shiva. It is also one of the four holy Char Dham sites (the other three are Badrinath, Dwarka, and Puri) and hence, is visited by a large number of devotees every year. The Jyotirlingam enshrined at this temple is said to have been worshiped by Lord Rama after his victory over Ravana. Ramanathaswamy Temple is known for its long hallways, elaborate corridors, colorful murals, and a huge statue of Nandi that measures up to 17 feet tall and 12 feet wide. The temple boasts of the longest corridor in India, which has about 4000 decorated pillars. The sight of this bright and beautiful corridor is bound to leave you speechless!

Famously known as Tirumala Balaji Temple or simply Tirupati Temple, Sri Venkateswara Swamy Temple is one of the most important religious places to visit in South India. The temple sits on the seventh peak, in a seven-hill range in Tirumala, and hence is also referred to as the ‘Temple of Seven Hills.’ The peaceful setting of this temple and its rich history and architecture continues to fascinate visitors. Srivari Brahmotsavam, which happens for 9 days in September or October every year, is a great time to visit this temple in South India. During this annual festival, Lord Venkateswara (an incarnation of Lord Vishnu) and His consorts Sridevi and Bhudevi are taken on a grand procession around the streets near the temple.

Also called Meenakshi Amman Temple or Meenakshi Sundereshwarar Temple, it is one of the oldest and most beautiful temples in South India. The original temple, which belonged to the 1st century, was rebuilt in the 16th century when a Muslim invader destroyed it during the 14th century. Situated on the southern banks of the Vaigai River, Meenakshi Temple is an astounding piece of South Indian architecture and it features intricately-carved pillars and temple walls, 14 tall gopurams, a quiet lotus pond, and a breathtaking hall of thousand pillars. The 15-day Chithirai Festival held in April every year brings more than a million visitors to Meenakshi Temple. Planning a trip soon? Indian Eagle offers year-round deals on flights to Chennai from Philadelphia and other US destinations.

Built by the rulers of the Chola Dynasty sometime between 1003 and 1010 AD, Brihadeeswarar Temple is a millennia-old temple located on the southern bank of the Cauvery River. This beautiful temple constructed out of stone is considered an outstanding example of the height of Dravidian art and architecture during the Chola times. Brihadeeswarar Temple (also called Rajarajeswaram and Peruvudaiyar Kovil) is a part of the Great Living Chola Temples in Thanjavur, which were listed among the UNESCO Heritage Sites. The sculptures, carvings, and inscriptions found at this temple pay tribute to Shaivism, Vaishnavism, and Shaktism.

One of the 108 Divya Desams (the religious places dedicated to the worship of Lord Vishnu); Sree Padmanabhaswamy Temple is among the famous temples in South India. The history of Padmanabhaswamy Temple dates back to the 8th century and it was also mentioned in ancient Hindu sculptures like Skanda Purana and Padma Purana. The architecture of this temple is a blend of the Tamil and Kerala styles, and its most recognized architectural feature is the 100-ft tall Gopuram with seven tiers. Overlooking a holy pond called Padma Theertham, this temple houses a reclining idol of Lord Vishnu, who can be seen resting on Anantha, the eight-hooded serpent God. There are three different doors for the darshan of Lord Vishnu and devotees can catch a sight of His head and chest through the first, hands through the second, and feet through the third door. Guide to the Flower Valley in 2021

Top Treks to do Near Ladakh